There is plenty of software to build virtual Lego models with your Mac or PC. These applications use properly defined Lego parts data in the form of 3d objects to help you create a lego scene or instruction booklet of a Lego model. Just for fun, I decided to render some of those bricks and turn them into Photoshop brushes.

These are the programs I used : LDraw (not exactly a program but it is long to explain), MLCad (to distribute a group of bricks all over a virtual floor), L3P and L3PAO (to translate MLCad file into a POVRay file) and POVRay (to render the scene). These applications are free, but they are somewhat difficult to use if you are technically challenged.
After rendering the scene, I opened it with Adobe Photoshop and started to create each brush.

Base image of rendered Lego Bricks

This is a low resolution version of the original image. Download the high resolution Lego bricks image here. 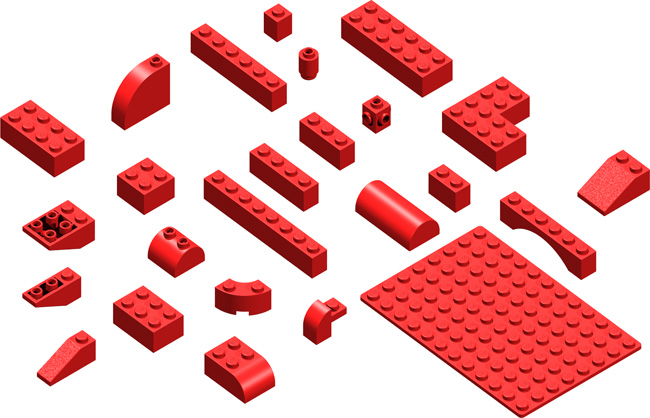 The process of creating the Photoshop brushes

Following the steps mentioned above, I created two high resolution versions of the Lego bricks brushes: A normal set and a negative set. Download the Lego bricks Photoshop brushes here.

There are many ways to install a set of brushes in Photoshop. I will show you only one. This method will append the brushes to the current list, instead of replacing them. 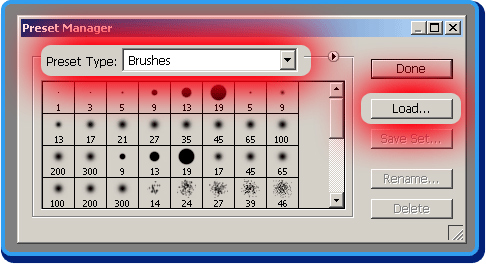 Painting with the Lego Bricks brushes

The difference between the two sets of brushes is how they paint according to the background. The process of creating the negative version although easy at first sight is a bit more tricky. Since it involves the usage of the rendering program, it is beyond the scope of this tutorial to teach you that process.

Just download the already built sets and concentrate on how you can use them to create different effects.

The normal set will paint a washed out brick like some sort of “Andy Warhol” illustration. The negative set, when used on a dark background, will paint a near exact version of the rendered brick.

Due to the transparent nature of Photoshop brushes, in the image on the left I intentionally superimposed the bricks to create an interesting effect, while on the right image, I took care of leaving enough space between bricks to create a more realistic composition.

Now the fun part begins. Using the presets control palette (see image below) you can customize the way the brush tool paints. 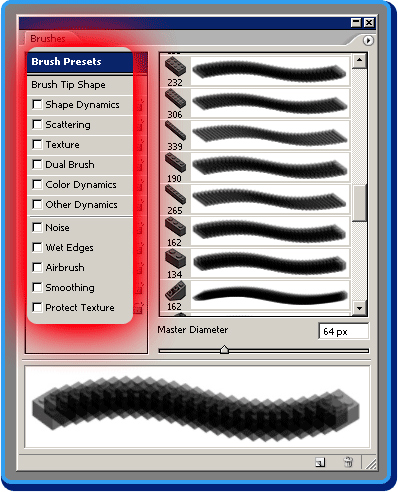 The following chart will show you how to achieve interesting effects just by tweaking a couple of basic settings. Play with these settings and explore new ones to make the most from this powerful tool

Although this may seem somewhat geeky, besides using brushes based on real Lego bricks, you can also paint with official Lego colors. Just check this color table from Peeron and start painting

If you liked this article please leave a comment below. I will probably soon be building more brushes with Lego minifigs or other themes like Lego Technic or Lego Bionicle.

More From: Photoshop Tools and tips